Without further ado, and with much deliberation, the final three images from my mini 6 week bridge project. The task was to shoot a particular location and create a series using three photos. The advise and guidance of one of the photographer’s running the project really helped me with the narrative and sequencing. Hope you guys enjoy and would love to hear your thoughts

A quick post of some photos which could potentially be part of my final three selections. I just need to clarify the narrative. Despair as a whole in the bridge? Personally a more compelling theme and will hold an interesting narrative.

I had initially started off with an interest on the City narrative and the human narrative as could be seen in this bridge.

But how do you show the state vs human & does it even apply in the area I had chosen? It’s not really a contested space. There is a sign saying no lying down, sitting or standing on the side walls but I had not seen it enforced.

So I have not had the chance to shoot nor scan the 3 remaining rolls of my processed superia 400 film.

Plus I am finding it difficult to pick the three photos aswell. How do you choose them as a coherent set? What narrative do I wish to show? Portraiture? Shadows? Still life?

I am part of a flickr group called Street & Repeat 106.Every two weeks a new instruction is given to help photographers challenge themselves and see the world in a new light. For this instruction we are asked to pick a location and create a series. We are given six weeks to get our images rather than the usual two.  In the end we are to have three images to submit for review. I have decided to shoot it entirely on film as an additional challenge. So far I have been a massing a mix sort of images, from portraits to still life.

It has given me the confidence to engage and ask people for their portraits as well as handle rejection much better.

My initial thoughts on the project.

The pedestrian bridge acts as both functionally and metaphorically, ie Perth City’s desire to connect the two hubs, Perth CBD and its more lively, bar and cafe filled neighbour Northbridge. The two areas were physically divided by a railway line, which has now been sunk and put underground in order for a new development approriately called the “Perth City Link” This pedestrian bridge is one of the few points which you could see the development, at a high point.

This pedestrian bridge is also one of two which allows pedestrians to bypass the street below and directly connects them to the cultral centre. As such the bridge acts as the inbetween space, where all sorts of characters walk by, arriving from the trains, on their way to either, the art galleries, cafes or bars. Mix this with the homeless people using the cultural centre as a place to sleep at night . I would like to capture the narrative of the City and its characters through this bridge.

So I’ve been away on hiatus for about 3 years haha. Easily explained by the cost of film and my low hit rate with it. Fast forward to 2017 and I think I am starting to finally get the hang of photography and the courage to talk to strangers when doing some street photography.

Man I do miss shooting film. I’ve already shot 6 rolls this year! Back with a vengeance. I bought a scanner last year too which is helping with the cost. I am planning to get some equipment to process some C41 film this week.

Photos are from a Superia 400 roll shot last year.

The street art scene in Perth has increased quite a bit. The local government has commissioned international artists to work all over the city. I usually dont like taking photos of other people’s work, so I try to take it in my own point of view. Sadly I do not know who the artists are and thus cannot give them credit. If you recognize any of the artist work please let me know. The films I used are Agfa Precisa CT, Kodak Ultramax 400 and Agfa Vista 400 & 200. All taken with the little Canonet QL17 GIII.

Although technically not my first slide film as I shot some expired tungsten film at the beginning of my film journey, seeing the results of the Agfa made me  appreciate and marvel at the beautiful colour positive film gifts us with. I see nothing close to it in the digital age. So much so that I am thinking of purely shooting slide film and investing in a several more rolls of Agfa Precisa as it is affordable to buy from ebay. I also found a very good lab that does processing. Abit on the expensive side but the scans are tiffs and the processing is superb. My scans look so much more richer and clean. I hope they stay around for a long time. 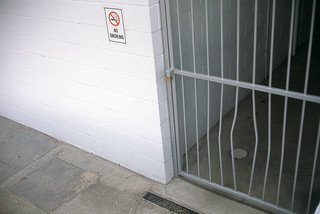 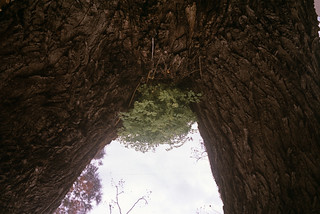 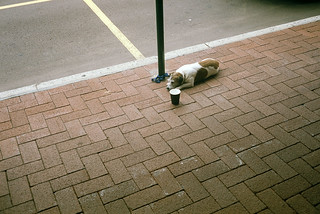 Part of my Beached As series. Went and drove to Fremantle one weekend with my Canonet loaded with Kodak Ultramax 400. Planning to make a book out of it after a year or so of going around beaches 🙂

On the season 3 finale of  ABC’s Perception, they may have leaked a new digital rangefinder but with a film advance lever!!!

Well that or have a very bad knowledge in today’s photography developments.

A man hides in a closet taking photos with a camera which appears to be a leica. What makes the scene so funny is that he  winds the lever of the rangefinder after pressing the shutter. It then goes to a a scene of the viewfinder which looks like a modern day canon/nikon dslr. With these settings…

He continues to wind and shoot, with subsequent still shots shown as the images taken.

Its all in the details and I felt that was a major oversight/lack of research… Unless I am mistaken and there are digital camera’s with a film advance lever as novelty…….

Maybe I am just too much of a photog nerd.

I have began exploring film as a creative medium rather than just something to capture a moment while out and about. Seeing Rebecca Norris Webb and Ralph Eugene Meatyard work has opened up a whole other realm of photographic possibilities.

All the shots are from the same roll of Kodak Ultramax 400. The last shot is the first time I have tried using film for long exposure work. I used an app as a lightmeter which thankfully worked out. I love how film creates  such unpredictable colours and effects.

A journey into the world of film photography